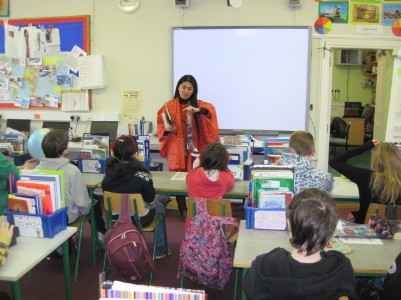 Eriko came in to tell us about Japan. Eriko was wearing the traditional coat it was red and had swirling patterns on it went down to the ground. She told us that she lived in Okinawa. Okinawa was not always part of Japan it was an independent country in order not to be taken over by Japan, China and the Philippines they traded silk with them but China and Japan still wanted to take over Okinawa. The king didn't want a war he didn't want people killed he knew Okinawa did not stand a chance so he gave himself up to Japan. In Japan They used to believe in Nature mostly Mountains' but also trees and water they meditated because they believe in the elements they don't cut the trees down around the mountain's because they are sacred to them they live around the edge of the country so when they have a tsunami it is terrible. In their houses by the door they have mats made of bamboo when the mats are new they smell of fresh bamboo the mats have to be replaced every few years. In Japan you could go skiing a then go to the beach and have a swim in winter. The reason you can do that is because there is lava under Japan and it heats up the water so even in winter you can go swimming.    This mean Japan in Japanese, They have three alphabets. Eriko gave us a round lump of brown sugar, She also gave us some tea I personally did not like it, it was too strong for me but mostly everyone else seemed to like it. Eriko also told us that if the cup had a picture on it you would turn the cup and drink beside the picture also they say itadakimas. Japanese gardens look as if they were already there they like to have ponds or a small waterfall they also have a moss garden were everything has moss on it I think the gardens look really nice. In the north of Japan it is colder then the south. Also that they only started having beef in 19 century. At first they did not want christens to come they liked their religion but eventually they let them in. They really like tea in Japan they had special tea houses. In Japan Green tea stayed green. 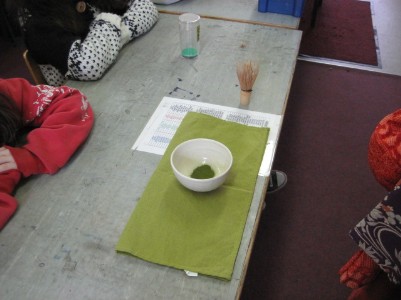 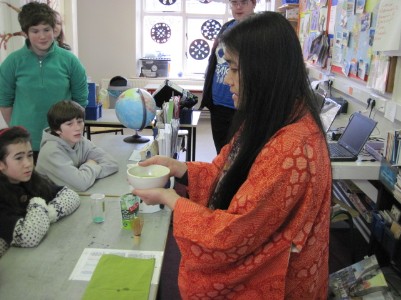