Daisy, Hazel, Ben, Daniel, Catherine & Hannah went to Brehany's bike shop on the Castlebar road. There were all types of different bikes including racing bikes mountain bikes, Basket bikes. He showed us how to measure an adult's bike and kids bikes. He also showed us how to fix a puncture. A puncture cost 4 to 5 euro. The most common repairs are repairing gears, brakes and punctures. The most expensive bike was 677 euro. He told us what safety gear to wear e.g. a helmet & high visibility jackets. He also told us what to have when cycling in the dark, like reflectors, front lights, & back lights. He said that most people wear their helmets on the back of their heads, which is very dangerous because the adjuster might stick into the back of their neck if they crash. The man's name was Steven. He was very friendly. He showed us a very old bike called a penny farthing. He said it was the oldest bike there, & that the first bikes didn't have pedals. I wonder what it would be like to ride a penny farthing. It would be fun to try.

By Daisy Loveday and Hazel Hopkinson 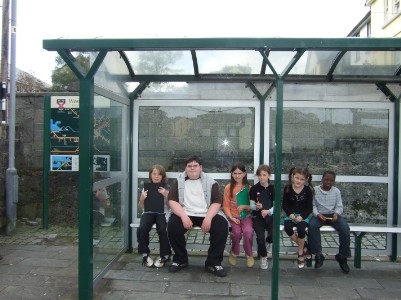 Finn, Rory Brickenden, Grace, Rory Gannon, Daniel Kinsella, Hannah McMaster & Conor visited the train station. Stevie came with us. It took about fifteen minutes to get there by walking. We had to cross lots of roads. When we got there, we saw lorries unloading wood onto a train. It was put onto the train by a big machine. It was very loud.
We saw the timetable for all the trains. On weekdays, there are three trains leaving Westport. On Sundays, there are four trains leaving Westport. We saw a machine that you could quickly get your ticket. A child ticket returning to Dublin is €17.50. An adult ticket costs €35.00. The manager let us on to the train. She also said we should go on an educational tour to Dublin. The seats were very comfortable. We crossed a big bridge. On the way, we saw the control panels. They were used to change the tracks to let trains go one way. We also saw the museum! It is a little one. There was a piece of paper saying that in the 17th century, a man said that trains would bring death. There was also a train track. The train was not operating. When we were leaving, we met the train driver. On our way back, we got an ice cream. Then we went back to school.

The bus stop and the tourist office

Ciara, Tom , Mathew, Gbija, Medb and Susannah all got to go to the bus stop.
The bus stop is on Mill street. There is  a timetable at the bus stop.
There is a bus shelter near by.
We also went to the tourist office.
Most tourists that come to Westport
come from all over Ireland. People also come from England, Poland, France,    Bulgaria, America, Hungry, Italy and Germany. The most popular attraction
is Westport house or Croagh
Patrick. To get around, you can hire a bike to cycle. You can get a tour on a tour bus if you like, and the cost is twenty euro. There are also lots of walking trails. The most popular question is…where is the nearest bathroom!!! 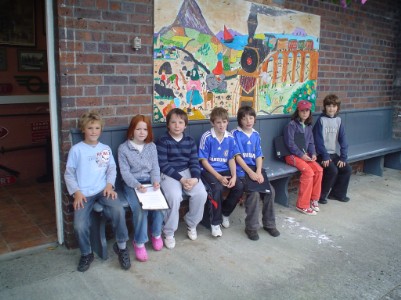 Sean, Darragh, Rosa, Niamh, Aoife and Nadine went to meet the traffic warden on Shop street. He showed us how to make a ticket on his hand held computer. He would take a picture of the car and ticket for evidence because if the owner of the car complains that he didn't get a ticket he shows him the photograph to show him he got a ticket. The traffic warden has permission to take people to court for not paying their fines.
One time he gave a ticket to someone in a Valentine's day card. When he gives tickets sometimes people get cross with him. A parking ticket costs €40. If you park in a disabled person's space without a badge the parking ticket costs €80.We took pictures with the traffic warden. We thought Tom was a very friendly and jolly person.
While we were on Shop street we counted the number of car parked along the street. We looked at the loading bays. They are for trucks doing deliveries. We counted four trees growing on the street. The oldest car we found was from 1998. We counted the cars from the bank to the TV shop. After that we went to Market 57 and got an ice cream cone. After that we went back to school and had our break.

By Sean and Darragh