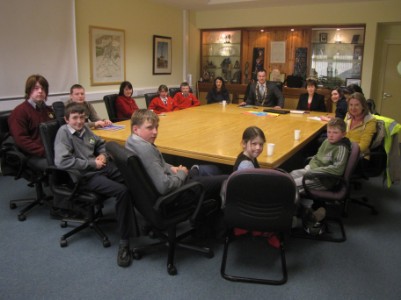 Daisy and Darragh went to the council office on Tuesday 9th March 2010. We cycled to the meeting. We met Miles Staunton of the Westport town council. We sat down in the council chamber for the meeting.  Children from the Gaelscoil, SHS, Rice College and Holy Trinity NS were there. They want as many children as possible to be in the parade. There were many ideas for the Saint Patrick's Day parade. Example: Making colourful banners about travelling green, making more bike racks around the town and at schools. The night before we went to the council Daisy made a banner for the parade. Sean Kelly will lead the parade. On Monday 22nd of March everyone is asked to make a special effort to cycle. All 5th and 6th classes from around Westport will be going on a cycle along the Railway Walk.
For people that have a facebook page there is going to be a group for green schools ,if you can please join. If Westport gets into the top 5 Westport will win lots of money. Then we would be able to make more cycling paths and trails like the Railway Walk. We met the head of the council, his assistant and Eva Gannon. It was fun .
By Daisy and Darragh.