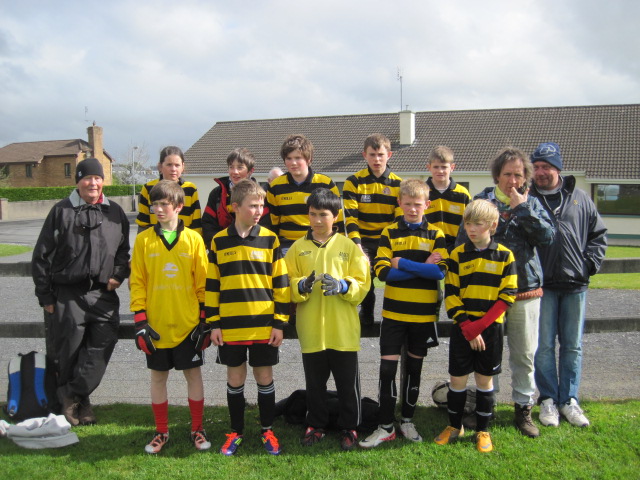 Indoor Soccer
In the indoor soccer we have two very good teams. The players on the wasps team is Paul in goal Sean and Darragh in defence and in midfield there is Tom and forward there is Grace. The Hornet players are Michael in goal Rory and Dylan in defence and in midfield there is Tom and Daniel. The wasps got to the semi-final and the hornets got to the semi-final but the wasps were in the Plate and the hornets were in the Cup. The Hornets semi-final was a great match they were playing against Scoil Phaidrag. Scoil Phaidrag went two goals up very early and it stayed like till the second half then we scored two in the second half and the crowd were betting very excited. It stayed two all till the end of the game so it went on to extra time and in extra time they kept on attacking and went and scored three goals. At the end of the match the final score was 5-2 but we had got unlucky because we had more possession then them. They deserved to win because their attacks were very good. In the wasps match they were playing against another Scoil Phaidrag but they lost 5-0 i think the reason was one of their players didn't turn up so they had play with four people.
Rory


On Saturday we were on the soccer knockouts and we won and now we are in the semi finals. We played well in the second half, they got two goals but we got four goals. In our team we had Dan, Michael, Rory, Dylan and Finn. We play in the gym in Rice College every Saturday. This week we were playing against Scoil Phadraig who are a good team. We lost against them last time. But we turned around and we got them this time.